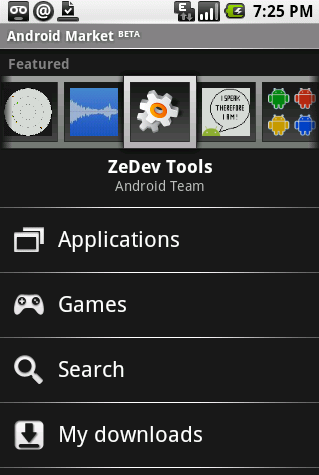 Google has released details on Android Market, the Android application that allows easy access to other applications, in short--it's Android's version of the App Store. The version that will ship in Android 1.0 will be in beta which means it won't currently support paid applications but it certainly plans on it. Having an Android Market will make getting third party applications for Android so much easier and can really show off the versatility of Android.
Terming it 'market' instead of 'store' was a conscious decision on Google's part because it wants to keep things open for developers and not kick out applications with no discretion (ahem, Apple). What's crucial is that Google keep malicious software out of Android Market or this free market might turn into a swap meet of malware
News