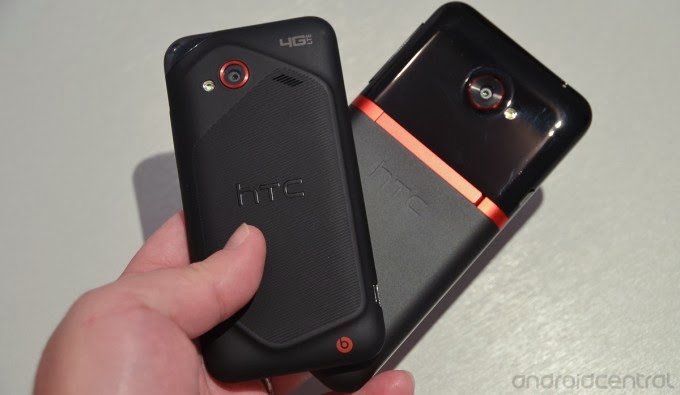 Two of the spring's hottest phones -- side by side, head to head. The Verizon Droid Incredible 4G LTE and the Sprint EVO 4G LTE. Both are the latest entries in their respective iconic lines, and both should serve their carriers well.
But while they're both HTC phones, it's obvious they're from different cuts of the cloth. As we've already written, the EVO 4G LTE is a close cousin to the HTC One X, in specs if not in name. The DInc 4G, meanwhile, is a continuation of the Incredible line. (As I wrote in our forums, it is not Verizon's version of the HTC One S, or the One X, or the One V. It's a completely different phone.)
The EVO is the more svelte of the pair, longer and leaner. The DInc 4G is more stout, with a smaller display and a rubberized, textured removable battery cover. But it still feels pretty good to the touch, thanks to the smaller form factor.
One common thread is HTC Sense 4, which is similar in look and performance across both devices. Both carry Beats audio, and both will be using the latest Qualcomm Krait S4 chip. Where things start to diverge is in the camera department. The EVO, being a derivative of the HTC One line, has the all-important ImageSense (or ImageChip) system. That means an incredibly quick shutter time (0.7 seconds), as opposed to the DInc 4G, which is still fairly fast, but it's obviously not anything you could call "zero-lag" speed. We'll need to test the DInc 4G camera in the wild, too, before passing final judgment, but we're also not expecting images to turn out quite as nice.
We've got a bevy of pics after the break. Check 'em out.