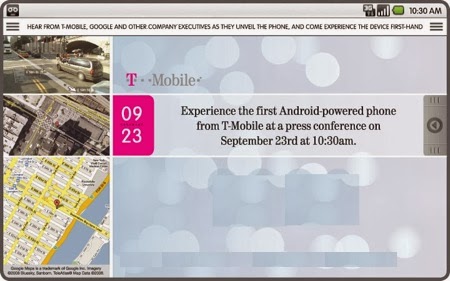 So it looks like this Android thing is really ready to jump off. We have an official report from T-Mobile tha
t they will host an Android-centric Event on September 23rd at 10:30 AM. This is what we've been waiting for folks, what can we expect? The official specs of the HTC Dream, the release date, pricing information, and a full tour of Android 1.0 isn't asking for too much is it?
The invite itself includes peeks of Google Maps, Street View, and 3G. Hopefully, T-Mobile will announce a widespread 3G rollout and GPS turn-by-turn directions for the HTC Dream. Either way, September 23rd is not too far off and the event is sure to be amazing. Keep checking Android Central for the latest updates on the HTC Dream and Android!
News