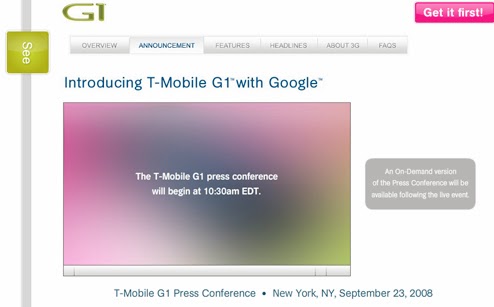 Following up its appearance on T-Mobile's main website and the leaked product shots, we have official word that T-MobileG1.com is live. In its current form, the site is bare and contains no official specs, pics, pricing, plans, etc. but we can at least officially confirm that the HTC Dream will go with the name T-Mobile G1 much like we predicted. Well, we didn't see it being called the 'T-Mobile G1 with Google' though.
Another interesting nugget is that the site has an "About 3G" tab which presumably will show T-Mobile's 3G coverage (or lack thereof). Tomorrow will be a big day for T-Mobile and its 3G rollout and G1 announcement will probably be the main attractions. Let's hope it all goes off without a hitch and we hear some good news!
News