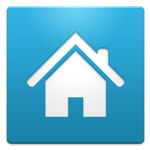 KitKat introduces a lot of much-needed features into Android, like better support for low-memory devices, a new storage framework, SMS integration with BLAH BLAH BLAH. We all know what the people want: transparent user interface elements! Following Nova Launcher's update to better visually match the KitKat launcher on the Nexus 5, popular alternative Apex Launcher now has a beta version that does much the same thing. The beta version was released to the Apex Launcher Beta Google Group, which you can find here. Then click this link and follow the instructions to download the APK itself (it won't let you through if you're not a member). There don't appear to be many other substantive changes in version 2.2, though the developer has tweaked the default home screen icons and other visuals to match the homescreen in Android 4.4.
As with Nova, you won't get the nifty integration with Google Now found on Google's launcher, but for picky users (like yours truly) the bevy of customization and visual options that come from the third-party launcher more than make up for that. The developer hasn't said when these changes will make it to the general Play Store version, but I'd expect it will be sooner rather than later. Want to apply those nifty Nexus 5 wallpapers? Check them out here.
Source: Apex Launcher Google Group - thanks, TheManii!