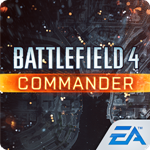 You can't release a AAA console game these days without also releasing a mobile app. For some reason. If you're looking for a way to actually play your big fancy shooter game on your tablet... well, this isn't really it, but it's close. The Battlefield 4 Commander app lets BF4 players coordinate their squad and hand out extra supplies during live Battlefield games. Once you reach level 10 on the Xbox 360, Xbox One, PS3, PS4, or PC version of Battlefield 4, you gain access to the Commander app, which mirrors the Commander mode in the full game. The basic interface is a top-down view of the map complete with current player locations, supply drop zones, spawn points, and all sorts of other information not normally visible in the shooter. Commanders can give orders to teammates directly through VOIP, all in a UAV to scout out enemy locations, or attack with gunship volleys or radar-jamming EMPs. It might not be as thrilling as the actual game, but a solid Commander could easily turn the tide in an online match. Theoretically, anyway. The early reviews of the Commander app are overwhelmingly negative, citing unexplained crashes, connection issues, and a poor interface. The app is technically only for tablets, but there are still a large amount of people claiming that their particular tablet isn't working, mostly on non-Nexus tablets. (Launch-day issues on Android for major publishers like EA is pretty much a given at this point.) This might have something to do with regional locks: EA usually releases a NA and ROW ("Rest of World") version of a new app, but Battlefield 4 Commander is a single ROW edition that works in North America as well. That may change at some point.
Here's hoping EA will sort through these issues. In the meantime you can play Commander Mode on the full game. Or just shoot people, I guess.
Source: Battlelog - thanks, BFC
!

Install (FREE)
P.S. Apologies for the poor screenshots. Apparently EA would rather you look at that gut's BDUs than actually see the app clearly.
Tags:Battlefield companion app EA real-time strategy shooter
Posted by adnane
Share to: