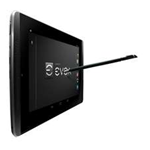 It's been just over two monthsNewegg is selling the EVGA Tegra Note 7 for $199.99, and as far as we can tell, it's the only place that you can get one. The Tegra 4-powered tablet is shipping out now after a week delay.
since NVIDIA announced its white box platform to promote the Tegra architecture, and now EVGA is demonstrating the value of that particular strategy.

The obvious star here is NVIDIA's Tegra 4 SoC, the same screaming fast processor and GPU combo found in the NVIDIA Shield. But to get the rest of the tablet below that magic $200 threshold, NVIIDA had to cut some corners on the rest of the design, namely in the screen (7" 720p) and RAM (1GB). The rest of the specs are pretty typical: 16GB of storage plus a MicroSD card slot, a 5MP rear camera and 1.3MP front-facing cam, and Android 4.2.2 at launch. The design is unique and mixes the dimpled back of the Nexus 7 with some flair that reminds me of a desktop graphics card, which is fitting considering the designer and manufacturer. An integrated stylus, dual front-facing speakers, and a MicroHDMI port round out the package.
The Tegra Note 7 is obviously aimed at gamers: with its SoC it gains access to at least some titles that are off limits to the rest of the Android world. But it's also got some software chops that other tablets don't, at least in this price range, thanks to NVIDIA's DirectStylus software. And one of the advantages of NVIDIA designing the hardware is that they'll be providing the software support. An Android 4.3 update is already scheduled for next month, and considering how well they've supported the SHIELD, I'd expect 4.4 to follow soon enough.
If you're tempted by the Tegra Note 7, check out our comprehensive review of the hardware.
Source: Newegg
Posted by adnane
Share to: