Colossatron Crash Lands In The Play Store To Wreak Havoc 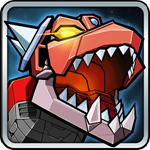 From points unknown, comes the one and only Colossatron. Like all giant serpentine robots, Colossatron is mainly concerned with destroying lesser civilizations, and you can take control of the action in the newest game from Halfbrick Studios.

This title is a sort of casual robot builder, if there is such a thing. Colossatron goes about its business, rolling around the screen, shooting at everything in range. Most of your interaction with the game comes in the form of adding new modules to the robot. If you connect three of the same color, they collapse into a single more powerful subunit. Match two of the primary colors, like blue and red, and you get a third color with a different power (purple in this case).
The game has clean graphics and a fun cartoony style with full support for immersive mode on Android 4.4. The developers also framed the game as a series of amusing, goofy news reports. Also, your enemy is called General Mustache – what more could you want? Still not sold? We're pretty sure Colossatron's core is made of a decapitated Power Ranger Dinozord.
Uncanny, right? Colossaltron is a buck, but there are some in-app purchases built-in.