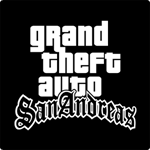 We've already cruised through Liberty City and significantly lowered property values in Vice City, now it's time for a west coast vacation in San Andreas. The third Grand Theft Auto game of the PlayStation 2 era just landed on the Play Store in its blocky, polygonal, sandbox glory, and you can pick it up for a cool $6.99. No in-app purchases, no time-outs, just good old-fashioned Rockstar madness.
San Andreas takes the GTA action to California with a huge, fictional city amalgamating Los Angeles, San Francisco, and Las Vegas, and some rural backcountry that hadn't been seen in the series up to that point. Like Vice City before it, San Andreas moves the clock back, this time going to a slightly larger-than-life version of the early 90s. You play as CJ, a young African American making his way through the various facets of the criminal underworld. You steal cars. You kill people. You do other things that kids probably shouldn't be allowed to do in video games.
This was the last GTA game on the PS2 and Xbox, and for a lot of players, it was significantly better than Grand Theft Auto 4, which tended to lose focus with too much to do in the fictional city. Improvements over Vice City include slightly better graphics, more vehicles, customizable cars and player avatars, an entirely new genre-spanning soundtrack, and expanded mini-games. The Android version features adjustable graphic settings and compatibility with MOGA and other Bluetooth controllers.
The game is an enormous 2.4 gigabytes, so clear away some space on your phone or tablet before buying it. Also, it looks like a number of early buyers are having download issues. The game is also available for at least some Kindle Fire models over on the Amazon Appstore.