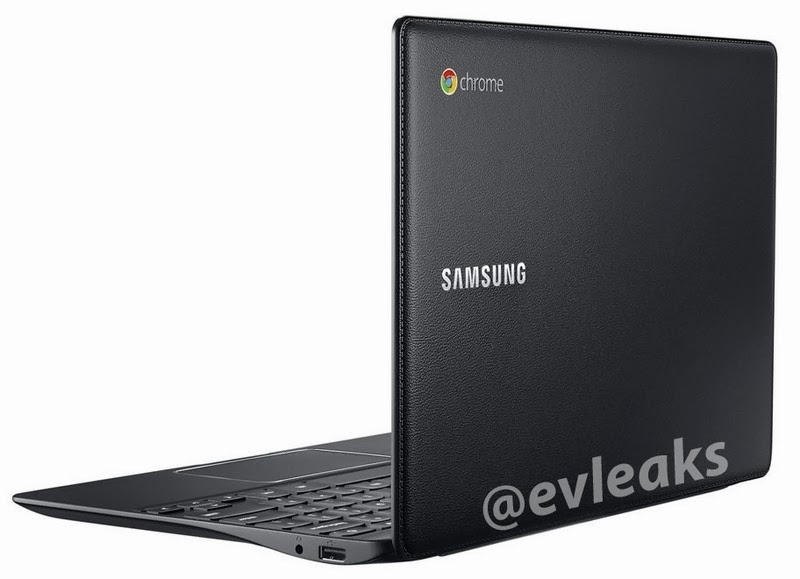 If you thought the dimpled soft-touch back of the Samsung Galaxy S5 signaled a new direction for Samsung, veering away from the fake stitched leather of the past year, well, the latest leak makes it look like Samsung's not quite done with that design trope just yet. Courtesy of @evleaks we're getting a look at what is claimed to be the Samsung Chromebook 2. And its faux stitched leather back.
That's right, not only has the stitched leather plastic look jumped from the Galaxy Note 3 to the TabPRO and NotePRO, it's now making the jump to the Chrome OS-powered Chromebook line of portable laptop things.
There's no saying what exactly is going on with the new Chromebook 2 (which would actually be the forth Chromebook that Samsung has produced, so who knows why it might be called number 2), though even this back-angle look shows it taking on a slimmer profile that hews more closely to the design language of the rest of Samsung's laptop line-up.
Chromebooks have been picking up some steam in recent months with releases from HP and even a touchscreen model from Acer, but so far it seems like many consumers have been hesitant to jump on board. Knowing as little as we do about the Samsung Chromebook 2 — it has a slim design, a keyboard, at least one USB port, and a fake stitched leather laptop lid — are you in the very least intrigued by the new textured model?
﻿
News