Top Gear Race The Stig Speeds Into The Play Store, But It Doesn't 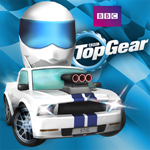 The Stig isn't your average racer. Actually, the character is. Hidden behind the same black visor that prevents us from knowing who is behind the wheel of any racecar before their helmet comes off, the character is both no racer and every racer at once. What does this matter? It doesn't, really. Here's what does - despite its name, Top Gear: Race The Stig isn't actually a racing game. Instead, it's a pretty straightforward endless runner driver. The game is more adorable than you would expect given the subject matter, but that's predictable for the genre. Race the Stig isn't completely neutered though, as it still lets you take control of several vehicles from the series and speed them through familiar locales.
That said, it's still an endless runner where your primary task is collecting golden nuts. That means one thing - IAPs. How bad are they? See for yourself.
Twenty bucks? Let me tell you where you can put those nuts.
If you want something that feels a bit more like a racing game (though, technically, it's all about pulling off stunts), consider checking out Top Gear: Stunt School instead.