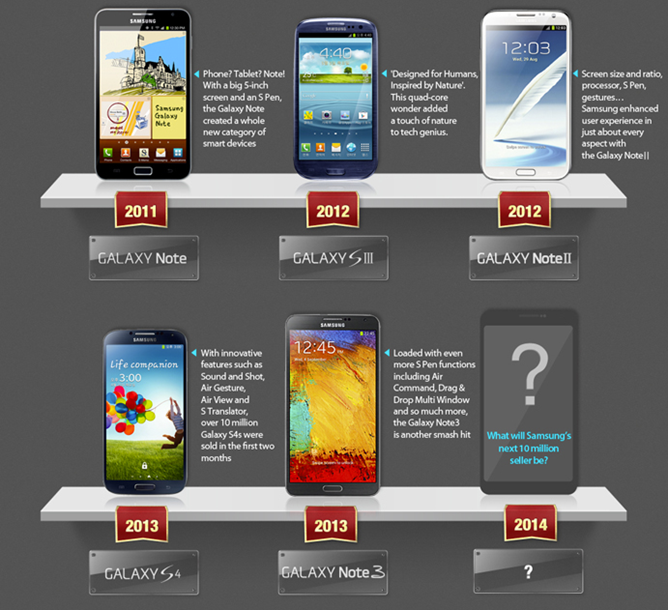 It's been just over two years since Samsung introduced the capacious Galaxy Note to an intrigued press corps at IFA in Berlin. Who'd have thought that it would turn out to be nothing less than a phenomenon, spawning a new sub-category in smartphones and innumerable flattering attempts at imitation? The original Note sold 10 million units by August 2012, but according to Samsung, the Note 3 has reached the same lofty goal in just two months.
That's units sold, not units shipped, according to this rather self-congratulatory post on Samsung Tomorrow, though I suppose they could be including Galaxy Note 3 phones "sold" to carriers and retailers. Either way, it's a lot of phones, probably only matched by singular iPhone models and Samsung's own Galaxy S4 by sales pace. It's even more impressive when you consider that it's one of the most expensive smartphones on the market, usually going for $700 retail or $200-300 with two-year contractual strings attached.
It's no wonder, then, that rivals like LG and HTC have given chase with "phablets" like the Optimus G Pro and One Max, respectively, though no one seems capable of catching up to Samsung in its own segment. Samsung is so far ahead of its competition (at least in the Android space) that it's introduced the even larger Galaxy Mega series, ostensibly to catch a little bit of big-screen lust in the mid range. The Note family is spilling over into tablets as well, where it has taken up position as the premium line in contrast with increasingly cheap Galaxy Tabs.
In any case, the Note series isn't going anywhere anytime soon, and you can expect a Galaxy Note 4 in the pipeline for sometime in the latter half of 2014. At this point, the real question is what more Samsung can do to make its plus-sized flagship stand out against its own progenitors. It's already got a gigantic, high-resolution screen and stylus, an embarrassingly high megapixel count, some of the best internal hardware available, and more software bells and whistles than most users know what to do with. Here's a thought: maybe wrap it all up in something other than plastic.
Source: Samsung Tomorrow